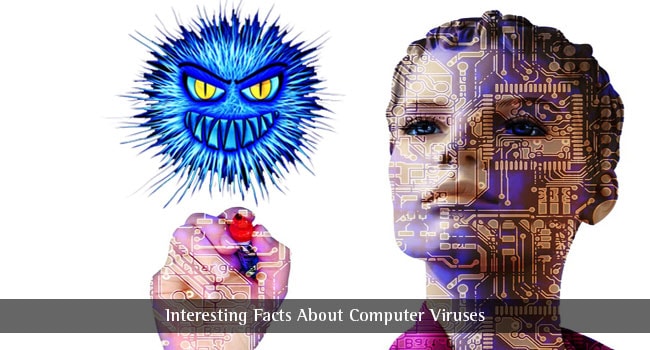 If you are in a find for fun virus computer facts, then you landed on the correct place. Just a few decades ago, the concept of a computer virus was considered as a no-brainer, more of a mythical thought than an actual threat. However, over the years, the situation has escalated.

In today’s day and age, computer viruses are malicious software intended to disrupt workflow, steal information and in general, cause terror, ranging from the average user to big corporations and government entities.

A computer virus is a very wide array of software, including malware, rootkits, spyware, adware, worms, ransomware etc. Often created by people ranging from amateur students to most wanted hackers, they are responsible for billions of dollars worth of economic damage every year, due to wasting system resources, corrupting data, increasing maintenance costs etc.

Let us dig deep in search to find for fun virus facts that are computer related. As they say, there’s always more to uncover, and the more you know, the safer you are. Creation and spreading online viruses is a cyber crime of the highest degree so if you have discovered a computer that is connected to your network that was used for an attack then beware, cops might be in search for you and yet this menace doesn’t seem to stop.

The first computer virus was called the Creeper Virus. It was detected on ARPANET, the predecessor of what we call today, the Internet in the early 1970s. It was a self-replicating program written as an experiment by Bob Thomas at BBN Technologies in 1971.

MyDoom (also known as [email protected]) was the fastest spreading computer worm ever created. It was first sighted in 2004, and it spread so fast, the record of which is yet to be surpassed as of 2017. Back in 2004, it was estimated to be impacting nearly 25% of all emails being sent. It caused the most economic damage, estimated at a whopping USD $38.5 billion.

The typical virus writer is male, between 14 to 25 years of age. Virus writers are mostly children and students looking to experimenting and honing their programming skills. The programmer of a virus, known as a virus author, intentionally writes a virus program.

About 70% of professional hackers and virus authors are associated with, or work under contracts of major organizations. Their primary job is to find loopholes, security issues and penetrate into the company’s network. These loopholes and security flaws are then fixed by other programmers to better secure their systems.

According to a report jointly formed by Microsoft Security Intelligence, Panda Security and Consumer Reports, about 40% of US households are affected by some forms of virus or trojans in their computers. Now that’s what we called a real find for fun virus fact, isn’t t?

Internationally, the United States is at the highest risk of being attacked by computer worms and viruses, followed closely by Russia.

Funnily enough, computer virus writing is not considered as an illegal act in US. Some other countries have cyber crime laws far stricter than the US. For example, Finland has made the act of writing a computer virus totally illegal, while mass exchange of viruses for any purpose is restricted in Germany.

Microsoft Research revealed that about 1 in every 14 programs downloaded by Windows users has some malicious component attached to it. Even though all modern web browsers have methods to steer the user away from malicious content, nearly 5% of users choose to ignore the warning and download the malicious software anyway.

Due to increasing security in the computers, browsers and at a hardware level, hackers have discovered that it is easier to hack the people themselves, than their systems. This is called Social Engineering.

Users get served a link on their email or Facebook, seemingly from a friend, which redirects them to download some application in order to view, which in turn is malicious. Since the link is seemingly coming from their friend, users choose to ignore browser warnings.

In this day and age, the primary mode of spreading viruses is the Internet. But what before the Internet was mainstream. Most viruses would be spread on removable media, CD’s, DVD’s and even before that, on floppy disks. Due to the commonness of sharing data and programs on floppies, this became a perfectly easy way to spread viruses to hackers.

Approximately 6000 viruses are created and spread into the wild every month. This should give you an idea of the menace we are living in. But then again, anti-virus and security companies are constantly on the lookout and updating their databases with the newest security measures so that you can rest easy.

As of now, even with advanced research on heuristics and artificial intelligence, there is no anti-virus software which can smartly detect new viruses all by itself. Maybe one day, this will be the future, and this menace will be killed once, and for all.